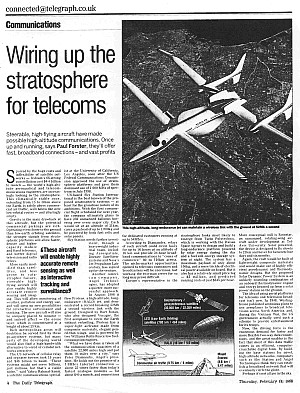 Wiring up the stratosphere for telecoms

Spurred by the huge costs and inflexibility of satellite networks – Iridium’s recent 66-strong constellation cost $4.4 billion to launch – the world’s high-altitude aeronautical and telecommunications engineers are increasingly looking to the stratosphere. This climatically stable zone, extending from 15 to 50 km above the earth, is currently alluringly empty, safely above commercial air traffic and well below the new low orbital routes, such as Iridium’s, 780 km up.

Gravity is the main drawback at this relatively modest altitude, but the potential commercial pickings are rich. Operating even closer to the ground than low earth orbiting satellites, the stronger signals from stratospheric platforms will allow faster, denser and higher capacity mobile and fixed telecommunications, and better digital television and radio relays.

More easily modified than satellites, and less at risk from catastrophic failure, steerable high-flying aircraft will also enable highly accurate remote sensing and imaging. The weather, pollution and energy use could all be monitored like never before, and new possibilities will open up for interactive surveillance and tracking.

The new aircraft will also be uniquely placed to monitor, and indeed affect, the ozone layer which is concentrated at a height of about 25 km. Presumably if the prognosis is bad, we will have these devices to thank.

Rich metropolitan areas will doubtlessly be served first by these go-anywhere systems, but many parts the developing world would find a high-bandwidth alternative to wired or cellular networks attractive. The US network of cellular relay and repeater towers took 15 years and $46 billion to build.

“These systems – effectively just very, very tall movable towers – might not serve billions, just millions, but that’s a viable niche,” said Yahya Rahmat-Samii, a UCLA satellite communications specialist, shortly after the US FCC approved the use of stratospheric platforms and gave them dominant use of 1000 MHz of spectrum (47.2-48.2 GHz) in July 1998.

For the grandiose nature of its ambitions at least, former US Secretary of State Alexander Haig’s Sky Station International is the best known of the proposed stratospheric systems. With the first commercial flight scheduled for 2000, the company ultimately plans to have 250 unmanned balloons hovering stationary or following guided paths over every major city in the world. Each would linger at an altitude of 21 km, carry a payload of up to 1000 kg and be powered by fuel cells and an array of solar panels.

Much of Sky Station’s unfortunate Heath Robinson-on-steroids image derives from the company’s need to boost further investment, but a heavyweight industrial team, including Aerospatiale, Dornier Satellitensysteme and NASA’s Jet Propulsion laboratory, has signed up for the venture.

Another US company, Angel Technologies, has adopted a quieter and more successful approach. In August 1998 it flew Proteus, a high-altitude long-endurance (HALO) jet and demonstrated a record-breaking 52 MB/s wireless link with the ground.

Designed by Burt Rutan, who also designed Voyager, the first aeroplane to circle the earth without refuelling, Proteus has a super-light airframe made from composite materials, elegant pencil-thin wings and is powered by two Williams Rolls-Royce low fuel consumption engines.

“What we have done is taken all the communication capacities of a satellite 22,000 miles high and put them 10 miles over a city,” says Peter Diamandis, Angel’s president, who holds out the promise of a 1.5 MB/s internet connection – about 25 times faster than today’s fastest analog modems – for about $40 a month, and connections for richer, dedicated customers running at up to 54 MB/s.

According to Diamandes, relays of such aircraft could circle lazily for up to 16 hours at an altitude of 16 km and provide 24-hour broadband communications to “cones of commerce” 80 – 110 km across. If it works, the niche market opportunities opened to telecommunication companies and broadcasters are enormous, but a question mark must hang over the viability of working the two-man crews for so long, and their toilet facilities.

Europe’s representative in the stratosphere looks most likely to emerge from Turin Polytechnic, which is working with the Italian Space Agency to design and build a long endurance platform powered by direct solar energy during the day and by a fuel cell energy storage system at night.

With a maximum payload of only about 100 kg, and a mere trickle of electrical power available on board, the scheme currently appears a tad lightweight. But so too, relatively speaking, is the $3 million price tag, and predicted running costs of just $345 per hour.

Stranger, and more conceptual still, is Rotostar, an unmanned rotating-wing aircraft under development at Tel-Aviv University. Solar powered, the device is designed to fly slowly to an altitude of 21 km and hover over a pre-designated point for between four days and six months.

Again, lightweight composite materials and highly efficient aerodynamic and thermodynamic designs are fundamental, but the proposed Solar Dynamic Power System is an unlikely-sounding combination of an onboard thermodynamic engine and energy beamed up from a solar power station on the ground.

The idea of using aerial platforms for telecommunications and television broadcast isn’t new. In 1948 Westinghouse published ambitious plans to use aeroplanes to broadcast television across North America, and during the Vietnam war, the US government actually used such a scheme to provide entertainment for its troops.

Now, the billion dollar driving force is the enormous and ever-growing demand for faster and more flexible two-way data connections, and the great enabler is the fact that most of this data traffic comes in an efficient computer-crunchable digital form. By building the base stations for novel high-altitude networks, companies like Sky Station and Angel Technologies really think that they can establish an all-new broadband network that will eventually circle the globe.

Perhaps it’s not all pie in the sky.