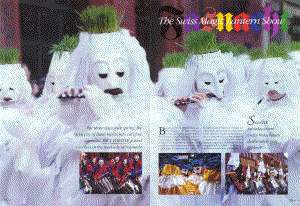 Basel, a stern city of history and industry, is an odd place for a carnival. The Baslers too, whose reticence makes the English look like Italians, are odd subjects. Good Protestants, they should feast on simple pancakes before Lent and then ignore it until the children demand Easter chocolate.

Instead Basel waits provocatively until the Monday after Ash Wednesday and then unleashes a three-day blast (Switzerland’s largest) that must still echo in Rome. Restaurants and bars bubble over. Masks, music and giant lanterns decorated with scenes of topical protest fill the streets. Only the stolid wealth-delivering Rhine remains untransformed.

Strangely there’s little of the drunkeness and loose debauchery that carnival usually means in northern Europe (although seekers should find it in Klein-Basel to the north of the river). As an alternative, an oblique wit and much giggly sobriety are on offer.

Irony also is valued highly. The officially-sanctioned guide, for example, begins: “The Fasnacht in Basle is a family celebration – strangers are not welcome!” Obviously this civic city plays its role as Switzerland’s intellectual capital to the hilt, well beyond the boundaries of its myriad scholarly institutions.

“We are both very open-minded and very conservative,” explains Felix Rudolf von Rohr, a native Basler and a member of the powerful 12-strong Fasnacht committee. “The important thing is to learn what a carnival is, what a poem is, and what makes a joke.” Duty must also have its own (steep) learning curve. The event, which involves three types of formal parade, three types of ritual protest and at least three extreme musical forms, is run on a rigid Swiss timetable that calls for a 4am kick-off in mid February’s damp cold.

But ‘Moorgestraich’ (Reveille) is what everyone remembers. An exact hand kills the town lights on the dot and simultaneously perhaps half of 100,000 voices roar. For an instant, in the dark, there is only this noise and the first sight of the giant lanterns. Then, as thousands of pipes and drums add to the din, the masked musicians appear.

Only the hands mark the groups – the ‘cliques’ in the jargon – of marching Vikings, grotesque clowns, devils – or worse – as human. Two or three clear the route for each tall decorated lantern (which is either carried or wheeled shoulder-high) and then a hundred or so pipers and drummers follow, beating on the senses of the spectators.

Along the river, the navigation lights (as well as those on boat cafes, high chimneys and telecom masts) remain alight, but through rain-flecked spectacles the Middle Rhine Bridge appears to carry a stream of glowing lava into town.

“This is only the prelude, but it is life’s gravity,” a bystander insisted. Did he mean ‘Moorgestraich’, I wondered, the cold hour he had to kill before his office opened, or his precise three-hour-old shave?

Later in the day, the mood changes radically. If ‘Moorgestraich’ is a spooky encounter with our ancient ancestors, then the afternoon parade, based around large floats, is sheer slapstick. The music turns tiddly-pomish and silly brass bands (still all masked and marching) drown the shrill military beat of dawn.

Many floats develop the themes introduced by the lanterns – Michael Jackson’s antics, environmental savagery, local and carnival politics and so on – and from these symbolic prisons, rural dwellings, fruit stalls and more, masked characters hurl sweets, flowers, fruit, vegetables and great drifts of confetti into a hilarious jiggling crowd.

A weirdness however persists: one group is a phalanx of priests wearing backward-facing masks, another is made up of forty brawny men dressed as women from the Swiss equivalent of Oxfam.

As night falls the crowds move into the cafes. At last it is acceptable to order a careful schnapps, or a half bottle of white wine; and the giggles and guffaws intensify as long satirical poems are read out, or sung by wandering bands.

Later still, with 50 other weary diners in the small lobby restaurant of my hotel, a 60-strong brass band did nothing less than ambush us and make us dance and sing until 2am. It was all too much for one British couple: I heard him ask, “Will you?” and she replied “Yes – oh – Yes,” with stars in her eyes.

Tuesday is – it has to be – a more meditative period, at least until the evening when a raucous concert competition starts. From 9am, the 200 or so lanterns are reverentially displayed in the cathedral place (the children get a quick training run too) and in the afternoon, the most courtly and beautiful phase of the carnival occurs.

The large groups vanish and individuals, couples, families and small troupes take their place, wandering more randomly in the pretty backstreets. Most still play pipes and drums, but bongos and saxophones also feature. To join in – to fall under the spell – is all too easy: one simply turns and starts walking behind the music.

There are elements of both a Pied Piper for grown-ups and George A. Romero’s classic zombie flick ‘Night of the Living Dead’ in this. The masks of the musicians are impenetrable and provoke a child’s contradictory fear and delight. The piper calls the tune, the drummer sets the beat, and to fall in and walk behind is both a contribution and a surrender.

As if to blow away these sticky cobwebs, the concerts that follow are ludicrous competitions judged solely – as far as I could make out – for volume, energy and discord.

The third day – Wednesday – sees nothing new. Monday’s slapstick parade is repeated with even more desperate energy, and the night’s revelry rises to climax befitting two-and-a-half day’s foreplay. At 4am it’s all strictly over and the street sweepers arrive.

In the lull after this three-quarters civilized bedlam, the noise of pipes and drums still ringing in the ears and shards of confetti still emerging from pockets and luggage, it’s impossible not to give a thought at least to what it all means.

The common explanation – carnival as psychological safety valve – is trite in Basel. Sure, the clownish crew parading the bloody bones of a cow about town probably feel strongly about something; but the solitary woman I saw flapping her way calmly through the streets as an incandescent blue butterfly probably doesn’t.

A better explanation is carnival as alternative reality – a sort of living, breathing theme park for the thoughtful, or those that don’t want to be. 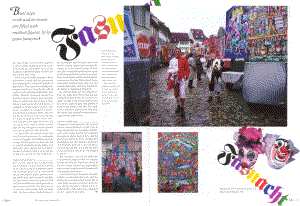 In the same way that we don’t expect a building to mean anything, we shouldn’t have too high expectations of carnival. Like a building it just is, a hotch-potch construction with all sorts of passages and galleries, ballrooms and bathrooms – public, private and secret.

In Basel, a further comparison with Jean Tinguely’s famous fountain in front of the city theatre is unavoidable. In February, like Fasnacht, some elements of it are glued by ice and others, screeching, could do with oil. But most bob and twist erratically, wanting nothing but a smile.

TRAVEL DETAILS The 1995 Basel Fasnacht runs from March 6 – 8. (In 1996, it’s from February 26 – 28). A contribution towards costs is collected by selling badges which in 1994 cost SFr5, 10 or 30 each, according to choice. Basel is about 480 miles from Calais, roughly eight hours drive via Brussels, Metz and Strasbourg. In Basel, allow at least SF12 for a light cafe lunch and SF25 for dinner in the cheaper restaurants. A small bottle of beer costs around SF3.50 and 2dl of wine around SF7.