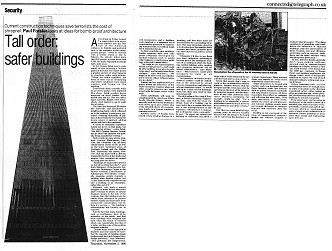 At 10.40 am on Friday 7 August 1998 a truck filled with explosives crashed into the rear wall of the American embassy in Nairobi and exploded next to the entrance to the underground garage. Timed to coincide with a similar terrorist attack in Dar es Salaam, the atrocity killed over 250 people, injured more than 5,000, and badly damaged buildings over half a mile away.

Lt. Col. Dennis G. Sabal was in command of the Marine guard of the building at the time. His report paints a graphic picture of what happens to structures at the centre of such attacks. “When the bomb exploded, the force of blast was so devastating that it blew out almost every closed window and frame on the seven-storey building,” he writes.

“Twelve-inch thick concrete walls on all floors of the embassy were shattered like thin plates of glass. Solid wooden doors mounted on steel frames were sent airborne, landing throughout the structure. There was not one office space that survived inside the embassy. Bodies were spread all over, most of which were buried in up to eight feet of rubble.”

The blast also destroyed the building’s lift shafts and stairwells, and caused a small bank building to collapse onto the embassy’s emergency generator. This released thousands of gallons of diesel fuel into the two basement levels of the embassy which immediately ignited, filling what remained of the structure with smoke and fire.

Secondary explosions, which turned out to be car fuel tanks, then ripped through the area. “For a period of time,” writes Sabal, “the MSG (Marine Security Guard) had no idea if the embassy was actually being assaulted or overrun”.

Such events are now all too common. London, Manchester, New York and Oklahoma City all have similar horror stories to tell, as well as the more hardened areas of Northern Ireland and the Middle East. Experience has shown, however, that the blast of the explosion rarely kills or injures many. Far more damage is done to human life by flying glass and shards of the structure itself.

“Buildings are supposed to protect us, but all too often they don’t,” says Rudy Matalucci, of the Security Systems and Technology Center at the Sandia National Laboratories in Albuquerque, New Mexico. “Generally speaking people evacuate a building when disaster strikes, but I’d like them to feel compelled to run into a building in an emergency, rather than out of it.”

Matalucci, who is currently leading a project designed to make future structures more resistant to terrorist attack, natural disasters and other ‘out-of-the-ordinary situations’, points to the nub of the problem. “Once the building is up, the owner buys insurance to protect himself, legally and financially, from unexpected catastrophes, but by then it’s too late – the building’s vulnerabilities are literally set in concrete,” he says.

Add the fact that many buildings, such as courthouses, have to be made accessible to the public, and that most buildings were designed and built when the threat of terrorist attack was considerably less than it is today, and the scale of the problem becomes apparent.

“Despite many recent high-profile disasters and near misses we know that the majority of building design professionals have not changed their design processes,” says Matalucci. “The problems are complacency, cost-consiousness and a building-code mind-set – a minimum set of requirements grounded in engineering fundamentals, but seldom mindful of abnormal threats.”

In their search for safer buildings, Sandia scientists have combined computer codes originally developed for nuclear weapons work to model in three dimensions what happens to multi-storey buildings subjected to bomb blasts. This allows cheaper and more efficient design and testing of building layouts, construction materials and techniques, and disaster mitigation plans.

“We want to use supercomputers to test at what pressure a roof would fly off a building, to see why its walls come apart, and to model how floors collapse,” says Matalucci. “We ought to be able to tell you whether you’d survive a blast ten floors below you in a hotel. That is the technology that exists today.”

Similar, but less sophisticated, computer programs are being used to model the physics of fire propagation, and emergency response plans and other security measures are being tested using the latest virtual reality tools. “Using computer-aided design drawings, you can actually put yourself inside a building during a bombing,” says Matalucci.

These computer-modelled ‘cyberblasts’ will shortly be complemented by data from White Sands Missile Range, where a specially-built four-storey building is due to be blown up to better understand how a typical reinforced concrete structure responds to a terrorist-type bomb.

Another series of Sandia tests has examined how different types and configurations of window panes fracture in a bombing, and how blast loads are transferred to the surrounding structure. The most immediate objective is to develop new types of glass that disintegrate into blunt, granular particles as early as possible in an explosion, producing slow-moving sand-like fragments that cause fewer and less severe injuries.

Practically this research boiled down to recommendations to set a new Federal courthouse as far back from the street as possible, to build barriers to prevent parking near the building, to have only small windows at ground level, and to control underground parking and access to the building strictly.

“Ultimately I’d like to see these new blast mitigation technologies become part of the intelligent structure of a building in which the heating, cooling, lighting, water supplies and computer networks are all tested continuously,” says Matalucci. “Microsensors could alert building occupants of water or air contamination by harmful chemicals or gases. Inexpensive microelectromechanical systems could be embedded in the structure to record stresses, temperature and other significant structural events.” It would add up to a black box for buildings, much like those now used by commercial aircraft.

David Hadden, a building vulnerability expert at Ove Arup & Partners, a UK-based consulting engineering firm, points out that the most the design team of a building can be expected to do is to ensure that the extent of any damage is not disproportionate to the explosion that causes it. “Obviously it is impossible to design for every eventuality,” he says. “To expect any commercial building to withstand unscathed a large vehicle bomb immediately outside the front door is a non-starter.”

Given that people don’t want to work, or live, in windowless fortified bunkers, Hadden stresses that the designer and the client must start by agreeing on the level of the threat to be protected against, and the objectives of any blast protection measures. Business continuity, for example, might be vital. “For a building to be successful, a reasonable balance must be struck between blast protection and other criteria,” he says.

Only then can more detailed engineering plans be devised. Hadden stresses that the distance the bomb can be kept from the building is of primary importance. “Broadly speaking,” he says, “the peak blast pressure is inversely proportional to the cube of the distance, so in the battle against blast effects, every metre added to the stand-off counts”.

Other elements to be treated with caution, and ever designed out, are floors bridging over public roads and features such as partially enclosed courtyards and deep window recesses. All these exacerbate blast effect by confining and reflecting the blast wave. Floor slabs must also be designed and engineered to resist upwards loads from blasts, and exterior cladding panels must not become dislodged and endanger rescue services, and survivors, after the event.

Hadden is not convinced of the value of topographical computer models and software designed to evaluate blast pressures. “The sheer complexity of modelling with confidence the influence of adjacent buildings, which may or may not fail and affect the propagation of the blast wave, plus the uncertainties of bomb location, size and efficiency, undermine the efficiencies of such an exercise,” he says. “Sadly there are no exact answers when designing blast protection.”

In fact, terrorist bombs don’t generally cause steel or concrete framed buildings to collapse, at least in the UK. This is because the elements of the structure that support the building usually have a narrow enough profile to escape the worst effects of the blast. In the UK hard lessons were learnt from the 1968 gas explosion at Ronan Point, and building regulations and design codes were subsequently modified.

Windows and glass remain the big issue however. One partial solution is laminated glass, especially if it can be fixed robustly enough to the structure to ensure that the whole window is not blown in, and it can even be retro-fitted as secondary glazing. “Undoubtedly blast-resilient glazing in both new and existing buildings is the single most effective way to reduce the risk of blast injury to occupants,” says Hadden.

Other fundamentals include ensuring that there are enough doors well dispersed around a building’s perimeter to allow evacuation in the direction considered safest, either before or after an explosion. Or, in tall, densely populated buildings, incorporating shelters inside the building for inward evacuation.

Even more basic, and far easier to implement than a redesign or a refit of an office building, is the need to draw up a detailed plan, with clear lines of responsibility, control (and indeed succession), which is implemented when a bomb attack is threatened or executed. Proper planning in areas other than building design and engineering saves lives too.

Currently over 100 bomb threats a month are made to federal buildings in the USA. The following is a summary of advice issued by the Federal Bureau of Alcohol, Tobacco and Firearms to those receiving bomb threats by telephone. In the UK, the possibility of dialling 1471 after the caller has rung off, or getting the caller’s number via a incoming call notification system should also be noted.

Never forget that initially the bomb threat caller is the best, and perhaps the only, source of information about the bomb. If possible, more than one person should listen to the call. A covert signalling system should be installed at switchboards to alert extra staff.

A calm response to the threat is essential, especially if the caller wishes to avoid injuries or death. If told that the building is occupied, or cannot be evacuated in time, the bomber may be willing to give more information on the location of the device.

Keep the caller on the line as long as possible. Ask him/her to repeat the message and record every word spoken by the caller.

If the caller does not indicate the location of the bomb, or the time and method of initiation, ask him/her for this information, politely but insistently.

Inform the caller that the building is occupied and that the detonation of the bomb could result in death or serious injury to many innocent people.

Pay particular attention to background noises such as motors running, music playing and any other noise which might give clues of the caller’s location.

Listen closely to the voice (male/female), voice quality (calm/excited), and any accents and speech impediments.

Immediately after the caller hangs up, report the threat to the person designated by management to receive such information and to the police and fire departments.

Throughout any evacuation that may, or may not, occur make sure you are available to the police who will want to interview you.