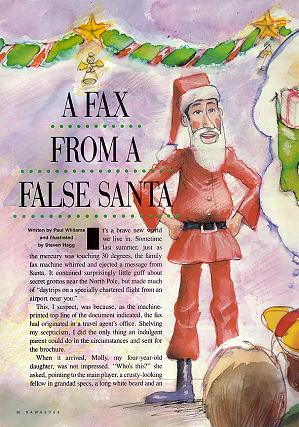 A fax from a false Santa

It’s a brave new world we live in. Sometime last summer, just as the mercury was touching 30 degrees, the family fax machine whirred and ejected a message from Santa. It contained surprisingly little guff about secret grottos near the North Pole, but made much of ‘day-trips on a specially chartered flight from an airport near you’. This I suspect was because, as the machine-printed top line of the document indicated, the fax had originated in a travel-agent’s office. Shelving my scepticism however, I did the only thing an indulgent parent could do in the circumstances and sent for the brochure.

When it arrived Milly, my four-year old daughter, was not impressed. “Who’s this?” she asked, pointing to the main player, a crusty-looking fellow in grandad specs, a long white beard and an odd red and white hat. After a moment’s contemplation, she continued, “Why is he wearing the same hat as Father Christmas?”

Such questions test the modern parent. As in any relationship, truth (generally) is paramount and I couldn’t manage the obvious reply, “But it is Father Christmas, darling”. At the same time, it didn’t seem fair to explain to one so young that the man in the picture was only a man dressed up as Father Christmas, working to earn his crust from our recreation.

I should not have been so concerned. The penny quickly dropped and Milly announced in terms brooking no disagreement, “Milly wants to go and see”.

No sucker, I hope, for unsolicited faxes, I made a few calls to find out where the best Santa deals were. And I have to admit that I was shocked, even in reasonably mature adulthood, to discover that there are at least two competing Santa Worlds in Europe. One is in Sweden; the other in Finland. This must delight the free-market economists of the service industries, but if ever there is a cut-and-dried case for a natural monopoly, Santa Claus must surely be it. What do our leaders and representatives meet in Geneva to discuss if it’s not matters like this?

The only problem with this admirable philosophy of choice is that it’s possible to choose wrongly. And too early in the morning really to think, at one of the most far-flung corners of our ‘convenient local airport’, I wondered if that that was what we had done. The children, tugged too early from their beds, had a hollow-eyed look of exhaustion. Most of their parents didn’t look much better and several were complaining that the bar wasn’t open.

On the plane, the parents got a drink and cheered up. The children perked up too, so much so that it almost became dangerous. The cabin crew did their best to keep smiling, but the kids, taking on the spirit of the mob, flailed their seat belt buckles at their neighbours like kung fu weapons and lowered their trays to use as a step in a gymnastic manoeuver designed to land them upside down on the lap of the person in front. I asked Milly, who had limited herself to using her seat as a trampoline, what she was looking forward to most. “Snow,” she replied.

Needless to say, it was this self-same commodity that was conspicuous by its absence at our destination. A pale sun shone through a dome of mist giving an eerie sensation of being bang in the middle of utter nothingness. It was several degrees warmer here than where we had had come from, and in the spirit of the expedition we had all dressed for the North Pole. We knew we weren’t going there, but the myths of childhood take more than a junk fax to dispel.

We were met at the airport by two elves and two coaches and divided into two groups, one was to go with Peter, the Green Elf; the other was to accompany Paul, the Blue Elf. I was surprised by the elves: both were almost a head taller than me and Peter, the Green Elf, must have been a few years older than me as well. As the bigger children fought for the front and then the back seats on the coaches, I asked him what he did when he wasn’t an elf. “I am a full-time elf”, he replied gravely. When questioned on what skills an elf needs (I didn’t have the heart to ask him how he got under a toadstool) he replied, “lots of patience”, rolled his eyes and set off to try and restore order on his bus.

Our first port of call in what is probably best described as the ‘Santa Compound’ was Santa’s house itself. By now most of the children were on the edge of frenzy and from the coach they hit the house like riot police clearing a siege. In the diffuse light and countryside quiet it seemed like a moment in a movie: I was an interloper in a world where the children had gone mad. But then the elves moved into action. I realized then why they were so big. Fingers were wagged at the ring-leaders and eventually we all squeezed into the biggest room of the building.

Most of the parents got their backs to the wall and plastered the same bemused half-smile onto their face as I am sure I was presenting. Nobody, I suspect, wanted to single out their child as the first for discipline. “Aren’t they enjoying themselves”, said one woman whose mind was clearly on a different planet. “If I could have sent them alone, I would have done”, announced one grey-looking father loudly, and another groaned almost to himself, “I’d much rather be at work”.

As the simple fact we could hear ourselves speak indicates, the volume level in the room had dropped slightly. When one of the elves got on to a chair (putting his head only inches away from the ceiling), something close to silence settled. Then a door marked ‘Private’ opened and Santa appeared beating his chest with one hand and attempting a deep “Yo-ho-ho”, which slipped to falsetto on the last “ho”.

I had a moment to register the obvious youth of the man behind the obviously false beard. “Son of Santa”, breathed the man standing next to me, who I think was beginning to enjoy himself. He was a policeman and I wondered if Santas are like policemen: you know you are getting old when they begin to look young.

This Santa was, I think, new to the job. As the children began moving towards him, picking up speed and momentum like an ocean wave, he actually half-turned to retreat into his private lair. But then the children, like a pack of small dogs, were upon him. I clearly heard one of the larger boys (aged ten or so at a guess) scream ‘trash him’, before abandoning his fake adult restraint and piling in to the back of the scrum.

The hat and beard were gone in seconds and Santa, weighed down by seething children, was heading for the floor. Imagining his naked and bruised pale body on the boards, I actually thought of stepping in, but then one elf started clearing a path to him by picking up children (very gently I thought) and putting them in one corner of the room. Other parents too retrieved their dishevelled offspring. Milly, bless her cotton socks, had decided it was far too rough a scene for her and had stood watching, holding my hand, with the same expression in her eyes I see when she witnesses an antelope brought down by a lion on television.

Beard and hat in hand, Santa returned to his room. The worst behaved children were formally returned to the charge of their parents and then the Green Elf got back onto his chair. “This is Father Claus”, he announced as the door swung open again. I think he was rattled; he certainly was breathless. He continued, “Does anybody have any questions for him?”

There was a silence like we hadn’t heard for four hours then one angelic-looking boy who had earlier refused to give up his football scarf, called out clearly, “I don’t think you’re the real Father Christmas”. A small girl started to cry. Several other children quickly joined in. The parents didn’t know where to look: nobody wanted to catch anybody else’s eye. Somehow we were all complicit in this scam.

Milly tugged at my hand. She looked concerned so I crouched down so she could whisper to me. “I want to go home”, she said. “I like it when Father Christmas comes to my house, but I don’t like it at his”.