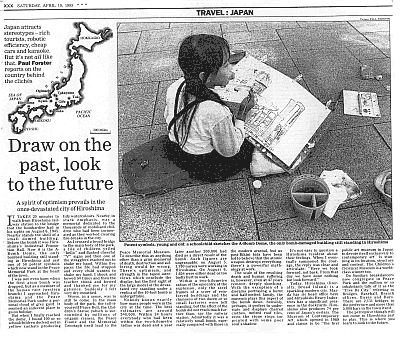 Draw on the past, look to the future

Downtown Hiroshima is a surprisingly normal Japanese grid of five and six storey buildings. Smart pedestrians and gentle cyclists co-exist on broad and spotless pavements which front banks, travel agencies and department stores. The slow-moving, well-catalysed traffic is new and predominantly white. Only the trams which clank down the middle of the street are at all unusual. This normality comes as a shock. Hiroshima is best known as the first city in the world to be attacked by atomic bomb. Thus it is known to every late 20th century citizen not just as a name from a map, but also as a black and confused blip in the consiousness.

It takes twenty minutes to walk from Hiroshima railway station to the bridge that the bombadier had in his sights on August 6 1945. Nearby stands the shell of a small domed building. Before the bomb it was Hiroshima’s Industrial Promotion Hall. Now it is the A-Bomb Dome, the only bombed building still standing in Hiroshima and just one of fifty potent symbols which now stand in the Peace Memorial Park at the heart of the town.

I was not even born when the bomb was dropped but as a member of the human race (western branch) I approached Hiroshima and the Peace Memorial Park under a personal cloud of grey guilt. It seemed an indecent place to go on holiday.

But when I finally reached the dome, I found a hundred or so schoolchildren decked out in yellow sunhats producing tidy watercolours. It was like a dream: daffodils growing from dust. Nearby, in stark emphasis, was a memorial dedicated to the thousands of mobilized school children who had been incinerated as they worked clearing fire-breaks in the city.

As I crossed a broad bridge to the main body of the park, a file of seven and eight year-old school children approached from the opposite direction. They all yelled ‘hello’ and flashed cheerful ‘V’ signs and then one of the stragglers reached out to shake my hand.

Within five paces the file had stopped and turned: every child wanted to shake my hand. I shook and bowed 34 times and then the teacher shook and bowed and thanked me for my patience.

Worse, in a sense, was to still to come. In the main body of the park, the toll-it-yourself Peace Bell, the Children’s Statue (which is surrounded by millions of origami cranes), the Peace Flame and the Memorial Cenotaph itself lead to the Peace Memorial Museum.

To describe this as anything other than a grim memorial of death, destruction and suffering would be wrong. There’s optimism and strength in the taped interviews which conclude the display, but the first sight of the large model of the devasted city standing under a replica of the ten-foot long bomb is unforgettable.

Within a two-kilometre radius of the hypocentre of the explosion, only the steel frames of a score of reinforced buildings and the chimneys of two dozen or so small factories were left standing.

Nobody knows exactly how many people were in the city at the time. The best estimates are around 340,000. Within 24 hours everybody who had been within the two-kilometre radius was dead and by a year later 200,000 had died as a direct result of the bomb. Such figures are ungraspable: on August 5, 1,780 nurses were working in Hiroshima. On August 6, 1,654 were either dead or too badly hurt to work.

I did not find the scale of the physical destruction of Hiroshima mind-boggling. The railway station is almost exactly two kilometres from the hypocentre. Admittedly it was a relatively small bomb, especially compared with those in the modern arsenal, but us post-Bikini kids have been led to believe that the atomic weapon destroys everything.

The scale of the resulting death and suffering is however, even at 47 years remove, deeply shocking. With the exception of a diorama portraying a burnt and half-melted family, the museum plays this aspect of the bomb down. Sensibly perhaps, it prefers to understate and displays charred clothes, melted roof tiles, even the stone steps imprinted with some poor soul’s shadow.

Given the peculiar nature of the bombing, it’s not easy to question a Hiroshima resident about their feelings. When I eventually summoned the courage, the reply was clear and articulate: ‘Here we look forward, not back. From that day we have done nothing but look forward’.

Today, Hiroshima (literally: Broad Island) is a sparkling modern city. In autumn, the sky is often blue and temperatures in the shirt-sleeve zone. It’s a wealthy town and well-endowed with civic art. There’s a statue or two in most main streets and a green rim of hills at the end.

On Sundays breakdancers now congregate in Peace Park. I enjoyed too an even-tempered city official trying to persuade one of the vagrants who inhabit the park to move from his prone, face-down, position in front of the Children’s statue. The tramp had broken no laws, it was explained to me, so it was nothing to do with the police.

The carp (which becomes a dragon when it gets to the head of the river) is the town’s official symbol, but the million or so inhabitants talk more of the ‘5 Bs City’ referring to Bridges, Baseball, Branch offices, Buses and Bars. There are 2,131 bridges in the prefecture and more than 5,000 bars in the town itself. Mazda has its head office here and Mitsubishi Heavy Industries has a significant presence in the dockyards.

Some say that were it not for the bombing, Hiroshima would not be worth a visit except perhaps as a departure point for an Inland Sea cruise or as the town near the famous Miyajima (Itsukushima) island shrine.

I disagree. The Museum of Contemporary Art, which opened in May 1989 and claims to be ‘the first public art museum in Japan to devote itself exclusively to contemporary art’ is stunning in terms of location, structure and content. The Children’s (Science) Museum is a world-class winner too. And these are but two of the twelve attractions listed on the free city guide map.

Practically, there’s a good range of hotels and shops in the town and the extensive ‘licensed zone’ offers cheerful – hilarious even – nocturnal entertainment, as well as food at prices to suit every pocket. The perceptive though will not come to Hiroshima just to play. This is where you learn to look to the future.