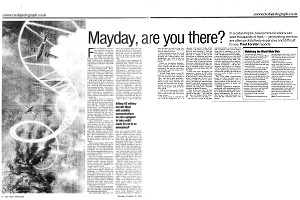 Mayday, are you there?

For unknown reasons, the magnitude, frequency and impact of natural catastrophes worldwide are all increasing rapidly. To date, the 1990s have seen the highest losses ever of life and property from ‘sudden onset’ hazards, and 1995 alone saw some 28,000 deaths and damage worth over £100 billion.

With many dead and wounded, and medical aid, shelter, food and water in short supply, it is obvious how national and international telecommunications can save lives. “Successful disaster mitigation depends on teamwork, and teamwork depends on communication,” says Peter Hansen, the United Nation’s Emergency Relief Coordinator. “Effectively you only have emergency services if you can call them,” says John Weaver of Greater Manchester Fire Service.

Very often, however, international relief agencies are unable to make the best use of the technology available. “Getting the equipment into the country is nearly always tricky,” says Henri Morand of the famously practical Swiss Disaster Relief (SDR) unit. “Very often customs officials will say no, or charge impossible duties. After the 1991 Bangladesh cyclone, for instance, we had to use the diplomatic pouch to get walkie-talkies in, and we only got round a Russian officer in Armenia by letting him call his family in Leningrad on our satellite terminal.”

Once inside the country, the would-be rescuers are often faced with further hurdles such as obtaining licences from authorities housed in destroyed buildings. “Every country needs standing orders in place for emergency telecommunications,” says Morand. “Immediately after a disaster is no time to start thinking about these things.”

Marine disasters are different. Since the ‘Titanic’ sank in 1912, over 50 international treaties have been formulated to ensure that all communications relating to ocean vessels in distress have absolute priority, and are free of charge.

“It’s simple,” says Hans Zimmermann, chief of the United Nations working group on emergency telecommunications. “We have the tools, and with deregulation the key word in telecommunication policy today, there’s a chance. We must join forces in the work towards the adoption of the Convention [the Convention on the Provision of Telecommunication Resources for Disaster Mitigation and Relief Operations] at the 1997 Intergovernmental Conference in Switzerland. “We need unrestricted use of telecommunications to prevent and alleviate human suffering anywhere in the world.”

The point is not academic. Since mid-August this year the UN’s Department of Humanitarian Affairs (DHA) has monitored sudden natural disasters in Belize, Cambodia, China, Costa Rica, Ethiopia, Nicaragua and North Korea (to go only halfway through the alphabet), and human-induced catastrophes have hit Azerbaijan, Burundi, Chechnya and half a dozen other too-well-known places.

The cutting edge of the UN’s response to any natural emergency is its Disaster Assessment and Coordination (UNDAC) teams, groups of specially trained engineers, doctors, fire-fighters and other experts, who remain on 12 hours standby to go anywhere in the world.

The DHA also maintains a 24-hour monitoring and reporting service and, on request, is designed to be the first agency to appeal for international assistance, channel donor contributions, and mobilize and coordinate the international response. This can include the emergency airlifting of blankets, tents and suchlike from warehouses in Pisa, Italy, and the alerting and briefing of search and rescue teams, and other military and civilian forces.

The teams land with their own tents and enough food and supplies to work for three days unsupported. Kit is kept to a minimum – it must be possible to carry everything by hand – but as the agency is designed to be the first to arrive in any disaster zone, a link to the outside world is vital.

The teams’ basic equipment for international communications are terminals that connect with the four satellites that Inmarsat, an international treaty organization with a marine communications background, maintains in geostationary orbit above the equator. Power comes from batteries and arrays of solar cells.

An Inmarsat ‘A’ kit – one big case weighing 25kg with a collapsible golf umbrella-sized antenna – carries voice, fax (at 9,600 baud), telex and data, and costs around £20,000. Cheaper is the ‘C’ equipment – a 14kg box that sends and receives data and telex, and receives only for fax – and “the latest revolution” is the Inmarsat ‘M’ standard – voice, and fax and data (at 2,400 baud) in a £8,000, 14kg briefcase whose detachable lid, the size of a tea-tray, serves as an antenna.

“They’re great,” says Charlie Higgins, who recently joined UNDAC from the British Overseas Development Administration (ODA). “Follow the instructions and they generally work. They are not actually radios so they usually get past customs. And everyone is truly amazed by the huge bills. Denials about who made what calls are always doing the rounds at the ODA.”

The latest terminals have SIM cards which allow multiple billings to one terminal, but in the aftermath of a disaster it is understandably difficult to say no to anyone in need, even when charges can be as high as £5.25 a minute. Henri Morand is impressed by the way many US military aircraft fitted with satellite communications are also equipped to take credit cards.

But the UNDAC teams must also maintain communications within the affected country, especially with other UNDAC workers and the national government. If the local telephone system has been destroyed, VHF and HF (High Frequency) radio usually suffice.

Both have their disadvantages – VHF – most commonly walkie-talkies used within line of sight – needs booster stations, which can be difficult to install or repair, to cover any large area, and HF is perceived as requiring too much technical know-how, and unwieldy antennae.

Political issues also loom large. “Foreign operations usually must fit in with local systems, if they exist,” says Higgins, “and in places like Rwanda it is a big question who goes in and sets up control of the airwaves. Someone must or nothing works”. Henri Morand echoes the need for formal treaties: “Once we had got our walkie-talkies into Bangladesh, we could never use them officially as we had no licence.”

Codan, an Australian manufacturer of high volume satellite earth stations and two-way radio equipment for remote locations, has recently come up with a novel use for HF radio.

“People laugh when we say HF because it’s viewed as old-tech, a nearly useless dinosaur,” says Jim Segredos, the company’s sales and marketing manager. “But recent technology has allowed much more efficient processing and transmission of information, so now we can send fax, data, internet and e-mail as well as voice on High Frequency.

“It’ll go for thousands of kilometres bouncing off the ionosphere – the big repeater in the sky – and the joy is that it costs not a penny in usage charges. It’s something very powerful.”

The sharp end is an antenna no one need be frightened of – a chunky 2.5 metre long whip antenna, self-tuning, designed for front or rear bumpers – and the bit most users see, if they want the full kit, is simply a fax or PC hooked up to a handset and three boxes the size of a mini hi-fi system.

The whole lot (except for the PC) runs off a 12 volt car battery, functions with practically any commercial communications software, has a normal range of up to 2,000 km, and is priced (for a base station plus one out station) at about A$15,000 (£7,600).

Codan has also developed a stunning system of HF radios linked to Global Position System (GPS) trackers. These allow automatic monitoring of any transceiver’s position (the base station can be set to poll the mobile unit every 30 minutes say, and will then put a numbered red blob on a software map) and in an emergency, pressing one button on the mobile unit will automatically send an SOS together with an identification number, the precise time, and a location accurate to around 25 metres.

“This is the new face of that crackly old radio technology,” chuckles Segredos. “The bad old HF days of ‘Alpha Bravo Charlie… are you there… are you there?’ are gone.”

Also new is a wave of satellite communications systems which will link handsets, not much bigger than today’s cellphones, to a constellation of low-orbiting spacecraft. Several conglomerates are lining up to provide such services but Washington-based Iridium, whose first launches are scheduled for November 1996, and who currently plan to start commercial services in late 1998, is the front-runner.

“By default we will have a global system impervious to catastrophe,” says Mark Fithian of Iridium. “All the frequencies and licences we require will be negotiated before we begin service, and in any emergency – earthquake, forest fires, epidemics, you name it – we will provide a highly decentralized service with a high survival capability.”

The UN’s Hans Zimmerman welcomes any developments that are going to improve emergency communications, but points out that all public networks are to some degree subject to overload during the acute phase of a disaster. He also complains that the high cost of satellite communications puts a heavy burden on the already over-stretched resources of many aid organizations.

“Private emergency networks, preferably with permanently allocated frequency bands, will always be an indispensable tool for emergency management,” he says, stressing that reliable communications are essential for the safety and security of the often voluntary relief workers, if nothing else.

“The effective use of telecommunications in all sorts of humanitarian emergencies has repeatably been shown to reduce loss of life, alleviate human suffering and lessen damage to property and the environment. We must be able to use what technology we have for the common good,” he insists.

The primary aim of the UN Department of Humanitarian Affairs (DHA), established in 1992, is to mobilize the international community after sudden natural and technological disasters. To that end it has embraced the World Wide Web wholeheartedly.

In the event of a catastrophe, the agency used to issue some 300 emergency disaster reports, mainly by fax. Now the same reports, and a stream of continuously updated information, can be published on the web. All is instantly available to any one of the world’s 30 million net users including aid organizations, government agencies and individuals.

Country profiles, consisting of general information, and emergency profiles, specific to particular emergencies, are fundamental elements but the system is two-way, allowing groups in the field or any interested – or desperate – parties to post messages. In addition, the distributed network has the advantage of being inherently robust.

Strategic data is designed to be available quickly and easily, and with multiple sources of similar information, the system selects and synthesizes information in order to aid decision makers. It is also hoped that the system will build up into an archive for those concerned with research on root causes of catastrophe, and conflict prevention.

When complete, the system – which dates only from December 15 1995 – will have two complementary structures. One will be entirely online. The other will link those with no access to the World Wide Web via a network of regional hubs that will work with the most appropriate systems, including paper and radio.

During emergencies, these centres will be responsible for on-the-spot coverage of assistance activities through daily reports. They will also disseminate incoming reports and alerts. Future sites will include the Great Lakes region of Africa, the Horn of Africa, the Sahel, the Caucasus, the Balkans and Latin America.

Registries on experts, search and rescue, and national emergency relief services are maintained at the site, and the maps and links are good. They include the Daily Africa Weather Map, Latest Situation Reports, Center for Disease Control Travel Information, UNHCR Handbook, US State Dept Travel Advisories, FAO Special Alerts, The World Factbook, and CBC Radio on The Internet.