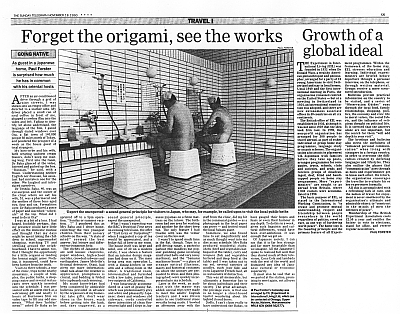 Forget the origami, see the works

After an air-conditioned drive through a grid of rainy streets, I was shown into an empty office and directed to a leather sofa. My driver placed a small can of iced coffee in front of me, plugged a cowboy film into the video and left. Failing to identify, let alone understand, the language of the film, I gazed through tinted windows over Ota, a small flat town of 140,000 people, 60 miles north of Tokyo and pondered the daunting prospect of a week as the house guest of a total stranger.

My host-to-be and his wife, both wearing uniform cream blazers, didn’t keep me waiting long. First into the room, Dr. Baba glanced at the video, listened and picked up the box. ‘Russian’, he said, with a frown. Understanding neither English nor Russian, his assistant had mistaken one for the other. We laughed and introduced ourselves.

Dr. Toshiki Baba was 40, an eye-surgeon and the owner of the clinic where we sat. His wife was 31, a pharmacist and the mother of three boys aged 2, 4 and 6. Formalities over, Dr. Baba produced a piece of paper and inscribed ‘schedule’ at the top. What did I want to do in Ota? What was I interested in?

I was at a bit of a loss. Foolishly, I had hoped that my presence would have little effect on the domestic routine and thought that my days might be spent taking the children to school, supermarket shopping, watching TV and strolling around the neighbourhood. I have to admit too that I thought the opportunity for a little origami or bonsai might present themselves. Nothing, it transpired, could have been further from the truth.

Visits to three schools, a tour of the clinic and trips to the nearby mountains, a couple of temples, the public baths, a shopping centre and several restaurants were quickly inserted into the schedule. I was presented with an alarm clock as a welcoming gift and nearly 11 hours of Kurasawa film on video tape to fill any odd moments. ‘What does ‘holiday’ mean?’, asked Dr. Baba as he sprinted off to a 5pm operation, ‘Sunday or summer vacation…?’

I pondered this as Mrs Baba and I drove home, collecting the two youngest children from their nursery schools on the way. ‘A state of mind’ seemed the best answer, but leisure and new and different environments help. It was the latter – the house, the way of life and the manners and customs that went with it – that particularly interested me in Japan.

The cliches of Japanese life are well known: chopsticks, paper windows, high-school suicides, crowded subways and earth quakes. James Melville’s fictional detective, Otani, had given me more information: small talk about the weather is appreciated, promptness is crucial, and bedding is folded into cupboards each morning. My scant knowledge had been completed by admirable bulletins provided in advance by the organizers of my homestay: take gifts, no shoes in the house, wash before getting into the bath. As a sound general principle, they also suggested expecting the unexpected.

What I wasn’t expecting was the BBC’s Breakfast Time news on evening television, the offer of ‘Earl Grey or Darjeeling’ when I suggested a cup of tea would be appreciated, and a fridge full of beer in my room. The house itself was large and solid, one of some twenty set on a modern estate. I was shown a feature on it in an interior design magazine. The main living area was an open-plan L with a dining-kitchen in one arm and a sitting-room in the other. A traditional room, tatami-matted and furnished solely by a low table, joined these two outposts of California.

I was luxuriously accommodated in a sort of granny flat. Predominantly grey and white and pleasantly Japanese, doors and windows slid sideways, cords controlled three intensities of clean fluorescent light and I slept in Japanese pyjamas on a mattress on the tatami. The bathroom had one area for washing and another for the short deep tub. The only feature I had trouble with was the velour cover on the seat of the loo.

I wasn’t to spend much time there though. Trips to a golf driving range, a pachinko parlour (the mindless but popular gambling game involving small steel balls and very noisy machines), and the ‘Samurai machinery house’ – a place of strange optical illusions, mazes and historical costumes into which the unwary are persuaded and then photographed – were quickly incorporated into my schedule.

Later in the week, an audience with the Mayor was added, special trips were made to meet the adults’ English teachers and I was driven miles to see traditional stone wreaths being made. I bowled an afternoon away with the staff from the clinic, did my bit in the communal garden (as a photograph in the local paper can prove) and trotted round the local Subaru main plant.

Somehow we also found time to eat magnificently and as much thought went into my diet as my schedule. Mrs Baba produced wonderful shabu-shabu (beef and vegetables barbequed at the table), curry and tempura (fish and vegetables battered and deep fried at the table) and I was taken out to eat eel, several varieties of noodles, sushi (raw fish) and even Japanese French food, all in tried and tested restaurants of considerable distinction.

This was all memorable, but ultimately a homestay has to be about individuals and their society. The great advantage, the privilege even, is that one is no longer a street-bound tourist wondering of life behind closed doors. Sadly, I can’t claim to have really understood the Babas, to have gauged their hopes and fears or even their humour in any depth, but to do this in a week given such linguistic and cultural differences would be over-ambitious. It was enough that we got on.

Of Japanese society I can say that it is far less strange and far more hospitable than we imagine. All the Japanese I spoke to realized full well that they shared much of their television, coca-cola and lambada with the rest of the world and dismissed any idea of Japanese cultural or economic superiority. In the final frantic moments of my stay, fast-forwarding ‘The Seven Samurai’ seemed a most fitting simile.

It must also be said that as we parted at the railway station, promising to meet again, not all eyes were dry.

Growth of a global idea

The Experiment in International Living (EIL) was founded in 1932 when Dr. Donald Watt, a wealthy American philanthropist and philosopher, arranged for a party of ten young Americans to visit Switzerland and stay in local homes. Until 1949 and the first International meeting in Paris, the organization remained centred on the United States but at a meeting in Switzerland in 1954, an International Constitution was adopted and now there are autonomous associate offices in 40 countries on all six continents.

The British office of EIL was established in 1936, but it was not until 1959 that the idea took firm root. In 1990, the non-profit organization has arranged for 300 people to travel abroad, as part either of individual or group homestay programmes, language study or au pair schemes. The organization also assists in the placement of UK diplomats with families prior to their taking up posts, arranges programmes for companies, trusts, schools, clubs and societies and sends and receives groups of disadvantaged, deaf, blind and handicapped people on homestay programmes. In comparison, 1,840 visitors were accommodated in Britain in 1990 and the organization is actively looking to increase the numbers of ‘experimenters’ from Britain.

The basic purpose of EIL, as started in the International Working Constitution, is ‘to create and promote mutual understanding, respect and friendship between people everywhere in the world regardless of politics, creed or race, as one way of furthering world peace’, and the homestay is the founding principle and the primary feature of all Experiment programmes.

Within the framework of the homestay, EIL stresses education and learning. Individual experimenters are briefed prior to departure either through a personal interview, on the telephone, or through written material, and groups receive a more structured introduction. Information bulletins provide practical information on the country to be visited and a series of ‘Observation Guides’ chart a course of casual investigation that runs from the local food through family relationships, shopping, politics, the economy and civic life to moral values, the social fabric and the influence of religious thought on political life. It is stressed that the answers alone are not important, but that the search for them ‘will add depth to your visit’.

The briefings and bulletins also stress the usefulness of ‘enhanced personal communication’ when living with strangers in a foreign country to overcome the difficulties created by differing languages and lifestyles, and outline the phases that communication goes through as the experimenter gets to know his or her hosts and vice versa. On return the organization encourages the experimenter to formally evaluate their experiences.

This is all accomplished with a refreshing lack of cant and the notion of travel for enjoyment is never smothered by the organization’s ultimate and admirable object: to ‘construct in the minds of men the defenses of peace’.

Membership of The British Experiment Association costs £2.50 a year and entitles the holder to vote in elections, stand for office and receive regular newsletters.

EIL (The Experiment in International Living) Ltd. can be contacted at ‘Otesaga’, Upper Wyche, Malvern, Worcs., WR14 4EN. Tel. (0684) 562577; Fax. (0684) 562212. It is a non-profit making, non-political and non-religious organization founded in 1932, now with 40 offices worldwide, which aims ‘to promote greater understanding, mutual respect and friendship between the nations of the world’.