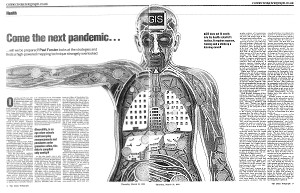 Come the next pandemic…

Over the past ten years the global incidence of malaria, pneumonic plague and dengue fever has increased dramatically. Old scourges like yellow fever, meningitis and cholera have found new life, and lethal new diseases such as pulmonary hantavirus, Lyme disease, and Ebola fever – the deadliest human infection except rabies and AIDS – have sprung into being.

Global climate change must take much of the blame. Warmer weather spreads disease-bearing bugs, and unusually dry spells in wet areas, and heavy rain in normally dry areas, favour rodents, insects, bacteria, protozoa and viruses over the predators that usually control them. Aside from weather, however, the unavoidable fact, even in 1999, is that infectious diseases are humankind’s natural population control.

Temperate Britain fares better than most hot-spots. For the bulk of the population at least, AIDS is now of little significance, and the jury is still out on the real risk to beef eaters. But influenza still poses a real threat.

Since the first global epidemic (pandemic) of flu was recorded in 1580, some 30 savage bouts have killed hundreds of millions worldwide. In this century Britain was hardest hit in 1918, 1957 and 1968. The worst event in 1918 affected around a quarter of the UK population and caused between 20 million and 80 million deaths worldwide. In 1957/8 around nine million cases in Britain all but paralysed the nation.

No one knows when the next pandemic will hit. Historically, intervals between events have varied between 11 and 42 years, with no recognisable pattern emerging, and as the flu virus constantly changes, it is a dangerous beast. The human immune system can only mount an effective defence if it recognises a virus from a previous encounter.

The UK’s official response to an emerging pandemic, which will most likely start in the Far East, is outlined in the Health Departments’ snappily-titled ‘Multiphase Contingency Plan for Pandemic Influenza’. This document aims to co-ordinate the response of a dozen or so different departments and organizations to reduce deaths, plan for large numbers of people ill and dying, and ensure that essential services are maintained.

As the plan stands, once a new potentially pandemic virus has been isolated, the World Health Organization will inform the UK Department of Health and the Public Health Laboratory Service (PHLS). The former will then convene a heavyweight committee and start liaison with the vaccine manufacturers. The latter, with a standing duty to help detect, diagnose, and monitor all communicable diseases, will set in train its own Pandemic Plan.

The early stages of this plan involves monitoring the numbers affected. Mortality data will come from the Office of Population Census and Surveys, and data on new cases will come from a specialised unit of the Royal College of General Practitioners (RCGP) in Birmingham, the Medical Officers’ Schools Association, and the Emergency Bed Service.

In the front line, the Birmingham unit of the RCGP now has 70 surgeries reporting electronically each week, but incredibly, in an age when schools email everyday announcements and pensioners order groceries online, this data is only compiled weekly and is only made available to the PHLS three to five days after the week in question.

Even more surprising is that no use is planned for Geographic Information Systems (GIS). These powerful computer-based systems are specifically designed to capture, store, retrieve, analyse, and display spatial data such as disease incidence, and are widely used by supermarkets, breweries, utility providers, insurance companies and the police – practically every large organisation that needs to deliver a consistent service to large numbers of people.

Medically, GIS has been used in the UK to investigate clusters of disease, such as leukemia cases reported near nuclear facilities, but the systems now offer much more than simple mapping facilities. They can identify areas of high disease prevalence, be used to answer “what if” questions of unprecedented complexity, and even incorporate animations to show changes in disease patterns over time.

Infectious diseases – where cases are not independent and the illnesses move through time and space – clearly need more complex analysis than those that have environmental or genetic causes. But GIS can now incorporate various correlation methods to plot and even predict of the speed and geographic pattern of transmission. Consequently it is possible to identify areas and groups most at risk, and target intervention efforts.

“GIS can be seen as a new approach to science, one with a history and heritage, a finite and well researched suite of methods and techniques, and a research agenda of its own,” says Dr Keith Clarke, a geographer at Hunter College in New York in one of the few published surveys of GIS’ use in epidemiology. “But GIS does not fit neatly into the health scientist’s toolbox. It requires rethinking and reorganizing the way that data are collected, used, and displayed. It requires expense, training, and a climb up a learning curve. It needs maintenance and support and can be both overwhelming and threatening to the uninitiated.”

Clarke sees GIS as a significant addition to the set of tools available to promote public health. “Good epidemiologic science and good geographic information science go hand in hand,” he says. “The future of GIS has already retained a role for the geographically literate public health expert and epidemiologists should seize the opportunity to set their own agenda and influence the technology and science toward the goal of public health.”

He points to two big barriers. One is the expense of high resolution mapping data. The other is the lack of knowledge and expertise within the NHS. “A lot of people still think of GIS as just software to generate a map,” he says. “But that is not so. They can be very powerful, but also complex for novice or casual users. People need to be trained and informed to use them to their full effect. Customising a system to perform complex or repetitive tasks easily can minimise this issue, but again it costs money.

“It’s odd to speak of the NHS in marketing terms, but GIS would allow the organisation to understand their ‘market’ a whole lot better. At one level a hospital could use GIS to analyse its catchment area and look at the incidence of certain diseases so that they might plan better for the future. Or they might look at historic data again with a view to better planning. GIS must have a use in a health service that is trying to understand and predict different profiles of people’s needs and susceptibilities in different areas.”

Bob Barr, a GIS specialist at Manchester University, concurs. “Apart from some very basic and localized ward-based supply and demand issues, the NHS makes very little use of GIS systems, perhaps because it takes a very aspatial view of the world,” he says.

“For years now a group of us sitting on a regional task force dealing with accident and emergency issues have been pressing the authorities to simply record the location of certain accidents with a view, most simply, to developing preventative measures. But the consultants take a very robust view against it. Accident and Emergency is overstretched they say and they refuse to release even a single clerk to collect this data. It’s very poor.”

Barr points out that GIS will become increasingly important for flu monitoring in particular. “Work has been done in the past on modelling influenza spread,” he says, “but it has always involved retrospective data. This is going to have to change in the next two or three years as new vaccines come in. These are genetically engineered to precisely match the strains of the flu virus, and in some cases can be administered using a simple nasal spray. But to make effective use of them we need to track, and predict, the spread of the illness in a way that is not currently happening.”

Shaun Leslie, director of Association for Geographic Information, reckons that the big problem for the NHS is access to data. “One side of this issue relates to the difficulty of obtaining data on the incidence of particular illnesses,” he says. “This is collected by community medical officers, the Public Health Laboratory Service and so on, but it is extremely difficult for others to get access to this data and link it to things like demographic information, or even simple facts like where the ill people live.”

Another aspect of data access relates to the information needed to plot illness incidence against. The flu monitoring service in Birmingham might have access to flu data, but this doesn’t mean that they have access to other data – like the demographic profile, address, postcode, age and so on – which would enable them to use their data in a more useful way.

“This problem is partly caused by the price of the most useful datasets, and partly by the confidentiality issues that surround so much medical information,” says Leslie. “But anonymised data is perfectly good to run useful GIS analyses. We don’t need to know that Mrs Bloggs at 47 Arcacia Avenue has a particular condition, only that – say – 1 per cent of the 15-30 year olds in Bradford are suffering from a particular illness. This would then allow resources to be applied to that particular area, or just for it to be monitored more closely so that it doesn’t become a particular concern in the future.”

Pressed on the PHLS’s under-use of GIS, Simon Gregor, a spokesman, acknowledged their potential value at both local and national levels. “We have begun work with with local organizations using GIS as a tool to investigate specific local issues,” he says, “but to use GIS more widely we need very detailed geographical information and an IT infrastructure to provide that information. With the NHSnet and labBase2 systems being developed over the next few years it will be easier to obtain such information. We will then develop GIS as another tool to use alongside those we are using already.”

This tardiness is ironic. One of the first uses ever of a rudimentary GIS was by John Snow, a London physician, who plotted the location of water pumps and the homes of victims of an outbreak of cholera in 1854. His map showed clearly that the deaths were all clustered around a single pump on Broad Street in Soho. Not waiting to debate his findings with skeptical colleagues, Snow persuaded the authorities to take the handle off the pump and new cases of the disease dropped precipitously.