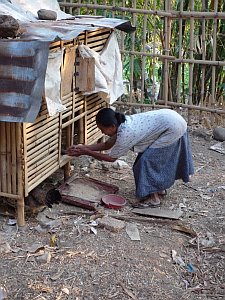 Risk, modernity and the H5N1 virus in action in Indonesia: a multi-sited study of the threats of avian and human pandemic influenza

This research, conducted between 2008 and 2012 at the STEPS Centre, Institute of Development Studies, Sussex University, and funded by the UK’s Economic and Social Research Council, investigates the dynamic framings of H5N1, Highly Pathogenic Avian Influenza (HPAI) and human pandemic influenza, exploring their interconnections, impacts and links with particular power relations and interests.

Concerned with policy formulation and everyday practice, the thesis draws on two years of ethnographic engagement across multiple sites to bring a conceptual perspective to bear on a policy question: why has the response to the H5N1 influenza virus been challenged in Indonesia?

The thesis argues that assemblages of historical, political, institutional and knowledge-power processes create multiple hybrid constructions of risk and modernity, which challenge technical responses based on epistemological positions and institutional arrangements that do not allow for such hybridity. Organised into four sections, the first section introduces the virus and its terrain, outlines a constructivist position, and argues that conceptually risk and modernity have multiple, dynamic, power-laden forms. The second section contrasts constructions of risk and modernity among the actors and networks responding to the emergence, spread and persistence of the H5N1 virus in Indonesia, with the constructions of affected people. The third section investigates the multi-directional processes that occur when ‘global’ policies and practices encounter ‘local’ social and political settings, and vice versa, through three empirical case studies of the response to H5N1 in Indonesia between 2005 and 2010.

The final section provides a set of reflections and conclusions. Given the conceptual plurality of risk and modernity, and the multiple overlapping and interacting hybrid constructions that have been empirically demonstrated in the case of H5N1, it is concluded that reductive, science-based, governmentally-orientated responses which treat nature as a matter of separate, fixed identity do not allow for such hybridity. The virus in action in Indonesia shows that any divide between nature and society is artificial and deceiving. Technical disease control responses need to incorporate understandings which accept the dynamics of culture, politics, and power.