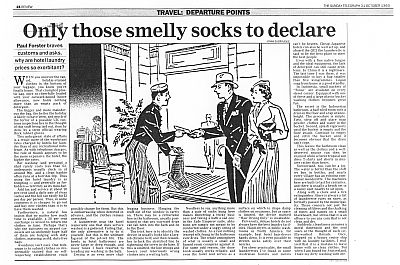 Only those smelly socks to declare

When you uncover the rancid, travel-stained clothes in the bottom of your suitcase, you know you’re really home. The more there is, the better the trip is likely to have been, I find, and much of the terror of a possible in-bound customs inspection lies in the thought of this stuff being laid out – item by item – by an unsmiling official wearing thick rubber gloves.

This unhygienic state of affairs is a result of two factors. First, if your itinerary isn’t planned around your laundry requirements, even the most helpful hotel often has to say no. Secondly, some financial provision (such as a second mortgage) has to be made to pay the bill.

As with telephone charges, the system is perverse: the more expensive the hotel, the higher the rates are likely to be. Thus there are many countries where it is actually cheaper to go out and buy new clothes than it is to have them washed.

Often the only possibility is to do it yourself, but this is the ultimate fag-end of the jet-set life. The bowls in hotel bathrooms are never large or deep enough, hunching over them after large dinners is a sure route to indigestion, and many times I have had to resort to treading my washing in the bath.

Drying is an even more challenging business. Hanging the stuff out of the window is rarely on. The alternative is a retractable line in the bathroom, usually positioned so that drips can fall both into the bath and onto the floor. The trick here is to remember to lock the stretched line. If this is omitted, the line droops and lowers your labouriously wrung clothes into a waiting bath.

Needless to say, anything more than a pair of socks hung here makes a shower a tricky business and a bath a sad one: in the Jade Emperor suite, ablutions are simply not meant to be conducted under a soggy string of three-quarters washed clothes.

As a rule nothing (except silk) hung here ever dries. The whole atmosphere of what is usually a small and humid room conspires against it. For some odd reason, the doorknob usually works reliably and even the toilet seat serves well on some occasions, but as space is limited and life is short, the small device marked ‘Hair Drying Only’ is invaluable.

Perversely, distance from deluxe hotels only makes laundry life easier. North American hand-dryers in public washrooms, for example, beat hotel hair-dryers hands down. It is even possible to stretch socks safely over their nozzles.

For sheer practicality, the small laundrettes I’ve found in some Australian hostels and motels can’t be beaten. Japanese hotels can also be well set up, and aboard the QE2 the laundrette is said to be the best place to meet the best people.

But even with the ideal equipment (and conversation), detergent can cause problems. In China it is a nightmare. The last time I went there, it was impossible to buy a bag smaller than five kilogrammes.

Conversely in Indonesia, small packets of ‘Rinso’ are available on every street corner. Equipped with one of these and a large plastic bucket (of which there is at least three, I reckon, for every one of the 180 million population) washing clothes becomes great fun.

The secret is the Indonesian bathroom, a half-tiled room with a drain in the floor and a tap at knee-height. The procedure is simple. First, strip off and place soap powder, clothes and water in the bucket. Secondly, splash vigorously until the bucket is empty and the floor awash. Finally, refill and empty the bucket until it becomes obvious that the drain can’t cope.

This leaves the bathroom clean as well as the clothes and a well-deserved snooze can then be enjoyed whilst a fierce tropical sun dries T-shirts and shorts in minutes rather than hours.

Switzerland too can be a joy. The tap water is better than the stuff most people buy in bottles and every village has an echoing communal laundrette. The machines are built to last for centuries and there is usually a bench in a sunny spot nearby to sit upon and wait.

Along with a clock and a fire extinguisher, there is always a list of laundrette rules on show, as formally passed by the municipality. These concern not just the cleaning of filters and the chalking of times and names on a small blackboard, but stress that it is an offence to use any coin that is not clean and dry.

Suddenly cleanliness assumes a moral dimension and the soul soars with such civilly washed threads. Once, trapped on a luxurious cruise ship with no laundry facilities, I realized that it is a mistake not leave home with clean clothes. But bound for Switzerland, I take my dirty washing with me.