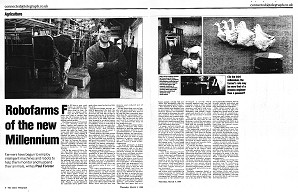 Robofarms of the new Millenium

For 365 days a year, work begins on Andrew Skelton’s 600 acre Lincolnshire farm at 5am. On dark, icy January mornings he first checks on the cows that are close to calving and then herds his 120 Fresians from the yard, where they pass the winter, into the antiseptic calm of the milking parlour nearby.

Working on groups of ten animals at a time, Mr Skelton cleans the udders, applies and removes the clusters of stainless steel teat cups (which take only seven minutes to extract the milk) by hand, and then treats each udder with a sterilising dip. Two or three hours later, when milking is finished, he turns to feeding the animals, clearing out their old bedding and putting fresh hay down.

At 5pm, again in the dark cold, he repeats the procedure, only calling it a day sometime between 7 and 8pm if all goes well. “You could describe it as a labour intensive business,” he says stoically.

Life for the owner of Daisy, the cow that milks herself, is somewhat different. More accurately known as Cow 5546/B, as determined by the electronic tag on her collar, Daisy makes her own way to the milking stall as and when she feels like it. As she approaches, the gate of the stall opens and her individual ration of feed rattles alluringly into a bin at the far end.

Whilst she munches, the stainless steel arm of the robot milker swings into action underneath her. First a set of rollers gently scrubs her udder and teats clean, and stimulates them for optimum milking. Then a cluster of four teat cups hisses into place to extract the milk. Finally a nozzle squirts the vital bits of her underside with a disinfecting solution, and a gentle automatic shove eases her back out into the shed.

This appears simple, but isn’t. As 5546/B approached the stall, the system recognized her from her electronic tag, and only let her in because she was due to be milked. Once settled in the stall, the precise dimensions of her udder and teats were scanned by an optical sensor and compared with a set of stored co-ordinates. Given a clean bill of health, the four teat cups were then guided into place by a millimetre-precise laser, and carefully removed one by one to ensure a perfectly milked out udder.

During milking the robot system also monitored, and logged, everything that was happening, reapplied any teat cups that were kicked off, and would have alerted the farmer by pager if anything seriously untoward occurred. More likely however, he, or she, would have been tucked into a cosy office nearby, mug in hand, watching figures for conductivity, milk flow, yield and duration pop up on a computer screen for each of 5546/B’s individual teats.

This is the daily reality of dairy farming for at least 200 farmers in Holland (where cows conveniently spend more time indoors), but Andrew Skelton, on the ground in Lincolnshire, is not overly impressed. “There’s potential,” he says, “but for robot milkers to work properly I reckon you need a specialised stockman/manager. I spend five to six hours with my cows every day and quickly know if one’s not right. There are all sorts of physical matters that you only pick up on if you go through the parlour with each cow individually every day.”

The robot manufacturers and dealers, of which there are at least three in the UK, say that their systems actually allow farmers to spend more time monitoring their animals. They also stress the commercial imperatives of producing more milk from fewer cows with less labour, and point to the official policies for the future: fewer cows per acre, less manure production, and reduced use of medicines.

No one disagrees however that cows are happier and more productive if they can be milked when they want to be, and that this is generally more often than the conventional twice-a-day regime. Thus robots operating 24 hours a day can increase the yield and health of high production cows, and decrease the stress on low production cows.

Professor Christopher Wathes, head of Bio-Engineering at Silsoe Research Institute in Bedfordshire, the UK’s only centre dedicated to applying engineering and the physical sciences to the agro-food industries, has no doubt that intelligent machines will play an increasingly significant role in livestock farming in the future.

“In manufacturing industry and agriculture one of our great successes over the last 100 years has been in using machines to replace manual labour,” he says, “and as farms get bigger, as skilled workers become more demanding and expensive, and as the pressures on farmers to use land more efficiently increase, we will doubtlessly see more intelligent machines and robots being used on farms.”

On the negative side, Prof. Wathes points to the relative stupidity and inflexibility of the current generation of machines. “If an emergency occurs that’s not programmed into the system, for example, then a machine is not necessarily going to take the best course of action. And there are some things – like calving a cow – that are very difficult for machines to do. We have to realise that machines are going to work alongside humans, not take over from them.

“But machines can do things that people can’t, like be there all the time, and they have infinite memory, and infinite patience. They don’t get upset – and have no wives or husbands to get upset when they come home late – and we’ve found that animals actually find machines less threatening than humans, and respond better to them.

“It seems that animals prefer familiar surroundings and established routines, and are suspicous of change. Machines are predictable and unchanging and animals quickly become confident with them. Humans on the other hand can be quite unpredictable and disturbing for animals.”

One objective of Rover, Silsoe’s famous robotic duck shepherd, was to investigate the relationship between animals and machines, and attempt to determine the rules that underlie flock behavior. Herding ducks, like a trainee sheepdog, Rover proved that an autonomous robot was capable of gathering and safely manoeuvring a flock of animals to a pre-determined point and holding them there.

A squat vertical cylinder on wheels, 28cm high and 44cm wide (and covered in soft plastic to ensure duck safety), Rover was capable of speeds of up to 4m per second (9mph) and could easily outpace the ducks. It was steered via radio by a control programme which was fed solely by images from video camera overlooking the training arena. To avoid constantly using animals during development, the team also built a generalised model of flock behavior and incorporated it into a computer simulation.

“The Robot Sheepdog Project covered robot building, machine vision, behavioral modelling and ethology,” says Professor Wathes, “and was a world first. The logical next step would be to put the camera on the robot itself, but this would mean that the computer, which would have to be onboard as well, would have a much more complex moving picture to interpret.”

Much of the other ground-breaking livestock management and welfare work at Silsoe has concentrated on animal monitoring. To replace the manual weighing of pigs, a vital but time-consuming and stressful process for both animals and farmers, researchers at the institute have developed a system which monitors pigs remotely and collects information on their size and condition, without them even knowing.

Using a video camera mounted over a feeding trough which is linked to an image processing computer, the system measures each pig’s body area, ham width and ham area, and determines each animal’s shape, weight and growth rate to within three per cent accuracy. Given how pigs move, change shape, overlap, and get filthy dirty, this is no mean feat.

The system allows farmers to determine the best time to sell their pigs, to select the most appropriate pigs for breeding, to ensure that their pigs are growing healthily, and even to tailor feed rations to each pig’s individual needs and growth rate. Precise feeding can also allow a reduction in the volume and smell of the pigs’ excrement.

As fish move around even more than pigs, and often live in even more murky and variable environments, the underwater monitoring of farmed salmon poses even greater challenges. But work done at Stirling University has shown that a few linear measurements can allow a fish’s weight to be estimated to about ten per cent accuracy, and Silsoe has developed an image analysis system to model and measure stereo images of fish in a tank.

A real life stockman however needs to know far more than the simple weight of his charges. Their behavior, position, stance, noises, and smells all give him crucial information about their well-being. Increasingly all these cues are coming under the scrutiny of new high-tech animal husbandry systems.

Electronic tracking and identification devices have been around for years, but now passive infrared detectors, similar to those used in domestic burglar alarms, can monitor movement and activity in animal sheds. Similarly, computers linked to microphones can not only detect unusual patterns of activity and raise the alarm when a fight breaks out in the pig shed, or when a fox gets in amongst the chickens, but can also actually identify individual pig squeals caused by fear, isolation, pain, anticipation and frustration.

Other recent research has covered travel sickness in pigs (concluding that they should ideally travel in large fully laden vehicles with air suspension), detecting stress  in chickens (using heart-rate and cardiac waveform monitors linked to lap-top computers by radio) and poultry lighting preferences (concluding that chicks up to two weeks old should have more light than the current recommended minimum).

Animal smells have come in for particular attention, partly because they are an often unwelcome by-product of livestock farming, and partly because they can offer a particularly valuable insight into the health of an animal. By training cows to blow into a bag before they are fed, for example, it is possible to analyse a sample of breath to detect increasing concentrations of acetone, the first detectable sign that a cow is developing ketosis, a common and debilitating nutritional disorder.

Fearing the unwelcome attention of radical animal liberationists, many scientists and farmers working with these high-tech modern systems go out of their way to stress that their primary concern is animal welfare. Efficient and profitable production is only possible using systems which eliminate stress and treat each animal according to its needs, is the message.

Prof Wathes talks enthusiastically about “a third age of agricultural mechanisation”. “While a dairy cow is being automatically milked,” he says, “other machines may be continuously monitoring her condition, milk yield and health – complete with appropriate treatment where necessary – and replenish feed, water and bedding stocks and oversee mating and parturition. In the third millennium the farmer’s role may be more like that of a process engineer than a peasant.”