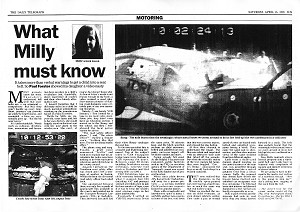 What Milly must know

Most parents know the scenario. Squeaker understands full well that seat-belts are no-arguments compulsory, but still won’t buckle up every time. Short journeys can provoke an unlikely forgetfulness, and reminded, a false cry occasionally goes up: “But the bit won’t go in”.

It’s understandable, I guess. Words like collision, deceleration, momentum and laceration have no place in a childish vocabulary, and – thankfully – direct experience of crashes, and their often bloody aftermaths, is rare.

I haven’t forgotten either that I did many miles as a child (to much parental admonition) standing on the transmission tunnel of a Mini Traveller.

Thrills for Milly, my six-year old, come faster of course, and left to her own devices she would happily stand on the front seat with her nose glued to the windscreen.

She can’t of course, but doesn’t know why. As fear of Father’s wrath is not reason enough in my book, a video seemed a good idea. Slow-motion pictures of flailing crash-dummies were certainly part of my own motoring education.

Naively I first looked for a tape in my local video store. Some joke: they didn’t even have an education section. I moved on to the library, the school, and then I ‘phoned the local police station for advice.

“The road safety officer please,” I said. “The which officer?” replied a female voice. “Nothing like that here. Try the divisional traffic office.”

The phone rang and rang. Finally a gruff voice announced “Traffic” and went on to explain that in Lincolnshire the police now have nothing to do with road safety education, and referred me to the county council.

Amazed, I pressed on. The Grantham Road Safety office was closed and I left a message at another in Boston. Within the hour the Divisional Road Safety Officer had called back.

She apologized because there was only five seconds of appropriate film available in the county and pointed me to the Transport Research Laboratory (TRL) in Berkshire.*

They answered fast and I had their video library catalogue the next day. To the non-specialist this is a bizarre and frightening document. Top of the subject index is V250 ‘Ynysygwas bridge beam tests’. Bottom is V236 ‘Opening the doors’. Between come sixty items including ‘Drink-drive survey techniques’, ‘Concrete road trials in Zimbabwe’ and ‘Skid testing 1950’s to 1990’s’.

V222 ‘Exhibition tape on child restraints’ looked to be what I wanted, but £35 (including VAT and postage) seemed a terrible price to pay for four minutes of tape, even if it was to keep the world’s most precious cargo in her place and healthy.

Paying actually felt good. As the helpful Visa processor explained, public facilities such as the TRL (an executive agency of the Department of Transport) can not now expect to be fully funded out of general taxation.

When their plain brown jiffy bag arrived I tucked myself away for a private preview. A section entitled Child-pedestrian impacts looked too grim for minors I thought, and it was.

Then, with a rough edit and introductory spiel in mind, I sat Milly and her cousin twins in front of the box, told them that this was a serious matter, and pressed the play button.

At first they strained to understand the image. The film was silent and imprinted with an obtrusive time-code that ticked off the seconds. But when the scientific reality of the test crashes hit home, they were boggled. “Cor… it’s flying,” announced the boys as an old Fiesta leapt to a twisted standstill.

But they soon realized that the dummies in the crudely spray painted cars were having a hard time too, in much the same way that real bodies would. When we reached the section on child restraints, an even deeper sobriety settled. First came a pan at normal speed of a test car loaded with belted and unbelted occupants hitting a block. Then came the same pan in slow-motion, and then slow-motion views of the same incident from four different angles.

Each time a child-sized dummy, placed kneeling on the central armrest of the rear seat, was propelled through the windscreen like a sack of potatoes fired from a circus cannon.

Sadly the segment that should have driven the lesson home (Belted and unbelted car occupants) was less convincing. The film had been shot indoors and showed dummies in a test-rig that was hardly recognizable as a car.

Still, a quick rewind and the message had sunk in: seat belts stop you being thrown forward in a crash. The kids also usefully learnt that the seemingly robust metal boxes we zoom around in do in fact fold up like wet cardboard in a collision.

Now Milly routinely straps herself properly into a three-point belt and I only have complaints of nausea and minute criticisms of stereo balance to contend with.

We are going to have to dismantle the inertia reel section of a seat-belt though. “How is this going to stop me?” she’s asking now, tugging at the slack from the reel.