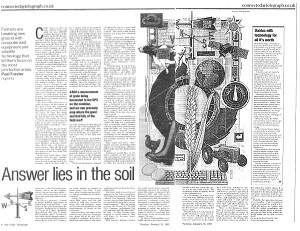 Answer lies in the soil

Come harvest time in July, Robert Pask will point his new £200,000 combine harvester first at the barley on his 900 acre Lincolnshire farm. As he revs the 7.4 litre diesel engine and manoeuvres the house-sized machine away from the barn, he will be enjoying nearly every comfort modern arable farming can offer: power steering, tinted glass, stereo music, an air-sprung seat, and cooled and filtered air.

Strangely, no dials will dot Mr Pask’s seamless cab-cocoon. Instead, just forward of his right elbow, an A4-sized liquid crystal display (LCD) will show essential information on machine speed, crop yield, temperature, and so on.

With one hand on the tiny steering wheel, and the other on the glorified gearstick that controls velocity and function, that’s all anybody really need know to survive a day on the farm. But dab on the touch-sensitive LCD – a robust device obviously designed with healthy agricultural thumbs in mind – and complete instructions and service details can be made to appear in 17 languages. Dab again and it’s all shaft speeds and bin loadings, and again to find out how best to harvest, transport and treat 20 different crops.

The cleverest bit however is a string of figures at the bottom of the main screen which constantly gives the machine’s latitude and longitude to an accuracy of about one metre. To some, this might seem simply a grand way to get to the pub in thick fog, but in fact the system – Massey Ferguson’s Datavision II – is the latest expression of what is nearly every arable farmers’ favourite subject – precision farming.

To use the jargon, the aim of this high-tech game (which really began in 1979 with electronic links that automatically lifted a plough minutely when the wheels of the tractor tugging it started spinning) is to minimise ‘inputs’ ie. seed, fertilizer, pesticides, herbicides, diesel and – of course – worker hours. After all, these all cost money and why should modern farmers be any less canny than their forbearers?

In his neat farm office, Robert Pask explains some of the practicalities. “Add a measurement of grain being harvested, for example, which is done with a spotmeter, to the GPS (global positioning system) on the combine, and we can precisely map yields – record electronically exactly where the good and bad bits of the field are.”

He selects a datacard – a chunk of plastic holding eight hours of information from the field – and shoves it into a box attached to his workaday 486/340MB Amstrad. He then rummages around in Windows ’95.

Suddenly we’re looking at a map of a 20 ha rhomboid-shaped field. The crop is winter wheat and the yield – clearly colour-coded on the computer map – varies from a high of over 7.3 tonnes/ha to a low of only 2.7 tonnes/ha. A mouse-click or two factors in costs and a price for wheat, and in a blink the machine drops a map showing gross profit margin per unit area across the field. Now the high counts as £364/ha profit and the low, a loss of £164/ha.

Sometimes the answer is obvious: thin soil on a wind-blown headland, say, or a low stripe of soggy clay. Other times, soil compacted by heavy machinery is the cause of trouble; others still, a patch of persistent weeds, or bad drainage.

For more detail, specialist soil mapping companies with GPS-equipped quad bikes will take soil samples to a plan, or at random, and test minutely for nutrients, or the lack of them. The resultant data maps can then not only be studied, but can also be plugged directly into GPS-equipped tractor/sprayer units which will automatically dose – with either fertilizer or herbicide as required – only the bits of the field that need it.

As a desktop finale, Mr Pask fiddles with his mouse again and produces a new map showing the exact track the combine harvester took through the field last year. It’s an artful and efficient pattern, but the resolution is such that we can see a minutely bodged corner and the five-second gaps – representing more missed grain – at the beginning of each row where the machine hasn’t started properly after the turn.

“Precision farming has changed my whole attitude to running an arable farm,” says Mr Pask. “I now know what’s happening much better and my attention to detail has rocketed. I hope I’ll never need spray a whole field again, and I’m still coming to find new respect for things like soil structure. There are rewards in being able to see the improvements so clearly on the screen too.”

Robert Pask is not alone in his enthusiasms. Massey Ferguson says that roughly 150 of their new GPS-equipped combines (hardware and software adds about £12,000 to the purchase price) will be working in UK fields this summer, and that about 8,000 UK tractors are currently using less advanced systems.

George Jenkinson, 1996 chairman of Robert Pask’s local Grantham NFU branch, is also keen. “The microchip has all sorts of uses in farming,” he says. “One part of it – with manpower being so expensive – is all about efficiency, making operators’ lives easier so they can do more faster. Twenty years ago one man worked 200 acres on average. Now he works 500 acres. That’s how much more efficient we’ve become.

“Distribution of up-to-date information on the internet could offer considerable savings and other benefits such as access to leaflets and books currently handed out by company reps. Sophisticated agricultural chemicals need sophisticated and timely instructions, and we could even be notified of impending crop diseases and things like that. The list is endless.”

Certainly few farmers do not now keep computerised chemical and spray records. Similarly crop diaries, vet and medicine records and details of animal movements are all now covered by software suites that cost less than £100. Farming On-line, a dedicated server offering detailed weather reports, reams of information on everything agricultural, e-mail, and links to the world wide web, has also been well-received.

Digital images from orbiting satellites are becoming important too. Using cameras working with visible and infra-red wavelengths (and occasionally radar) farmers can now zoom down on their fields from 800 km up. Crop, crop density and moisture content can be clearly seen, and by measuring things like the amount of photosynthesis occurring, farmers can get real time pictures of what’s going on.

Some argue that these ‘live’ images are more useful than yield maps, or even soil maps, which can only reflect what has happened in the past. George Jenkinson would like to see them available on the internet, and UK government inspectors are certainly finding them useful, together with archived satellite maps going back to 1986, for checking farmers’ EU aid applications.

Jim Orson, head of cereals development for the land consultancy ADAS (the government’s old Agricultural Development Advisory Service) stresses that UK farmers currently need all the help they can get from technology. “They are having to leave the cocoon of CAP (the EU’s Common Agricultural Policy) and move into the big world,” he says. “And as they become more exposed to world markets they will have to become more competitive”.

With the USA, the UK’s giant rival in the world cereal stakes, typically producing wheat at an average of about £85 per tonne (compared with the UK’s £95) and with world demand for wheat soaring, US grain prices and international currency exchange rates are quickly becoming as important to UK arable farmers as weather reports.

Mr Orson accepts that yield-mapping is useful but points to some limitations. “Matching inputs to yield is a good idea, but the science is not necessarily that simple,” he says. “In theory high yielding areas might appear to need more inputs but this is not necessarily the case. As yet, no one really knows. The technology might be slightly ahead of the agronomy here.”

It is heartening to know however that since 1990 the most profitable cereal farmers have clearly been those using lower than average amounts of pesticides. This is the opposite of the 1980’s when the heavier users were making the bigger profits.

Possible future developments in arable farming are many and varied. Tractors will probably soon have image analysers to detect crop rows and even weeds, which they will map. Intelligent sampling systems will cut the cost of soil surveys, and new agro-chemicals, plant hybrids, and even crops – yielding non-fossil fuels, fibres, and ingredients for lubricants and paint – will call for sophisticated decision support systems which will allow farmers to play complex ‘what if’ games.

Those in the business know there is no room for complacency. Recent spectacular increases in UK wheat yields are now levelling off and arable farmers face some tough questions. In Britain the main debate centres on whether a low input/low output approach is best, or whether less land should be farmed to its full potential, thus releasing maximum land for recreation, conservation and other uses.

Globally, the questions become even tougher. Yield growth there is levelling off too, prices are falling, and with the world’s population still growing rapidly there are mutterings – for the first time in decades – that in the future the world might not be able to feed itself.

High technology is now probably as important for livestock farmers as it is for their arable cousins. For beef cattle, as traceability of food becomes more and more important, computer readable tags, and even subcutaneous smart-chips that will trip airport-style security gates, will have to be introduced soon. Britain (though not Northern Ireland) still lacks even the most rudimentary computerized system to track cattle and meat.

In the dairy, cows are regularly tagged with transponders (strapped to their ankles) that identify them to a computer which monitors their state of lactation and yield automatically, and arranges for the requisite amount of feed to be mixed and delivered. An obvious plus is that it allows animals to be treated as individuals rather than as identical members of a herd.

Extending this control, recent experiments at ADAS’ dairy research centre near Winchester have successfully adjusted cows’ diets to produce a ‘natural’ low-fat milk with more protein and a more healthy balance (for human consumers at least) of saturated and unsaturated fats. Lots of huskless oats does the trick apparently, a foodstuff that has the added advantage of being entirely natural.

Milk produced by the ADAS cows clocks in at around 1.8 per cent fat, compared with 4 per cent fat for milk from cows fed on grass sileage. But the story does not stop there.

Pushing onwards, the researchers then set about trying to transfer Omega 3 fatty acids (a fish oil that appears to be responsible for so many healthy Eskimo, Japanese and Finnish hearts) directly from feedstuff into milk.

Omega 3 however is only produced by marine plankton and has to be processed from fish caught in cold salt water and then added to the feed. The research team found that transferring it into pig and poultry meat and eggs was relatively easy, but that the efficiency of transfer into milk was ‘poor’.

A small mercy perhaps… at least until cows start going to sea in ships.